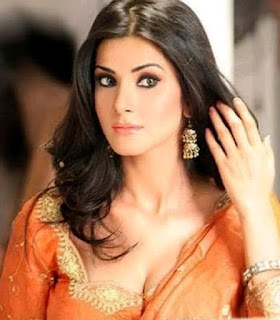 In the morning, Poonam wakes up in the small house. Poonam holds his hand and stands up. The song ‘tum ho’ plays in background. They come out. Lakhan says there was another promise I wanted to make. We will face all troubles together. Vow? Poonam holds his hand and says promise. He says sit in the car. They leave. Dadda is with mitlesh in the market. He says in front of you all I introduce bahu bali to be, Mithlesh. He claps. People are disappointed. Dadda says he will take tax from you. Mithlesh says thank you. Happy new year. Dadda ji says from my side too. A man says this is injustice. Dada ji says if your earn 500 you will earn more. A shopkeeper says Priyom reduced and forgave tax to some of us. Dadda ji says that was Priyom. A man we are not earning machines. A car passes by and some mud spits on dadda’s shirt.
Mithlesh and dadda come home. Mithlesh says don’t worry. I have sent hariya after the car.
A car stops outside haveli and a girl comes out. A girl comes in and says is choti nani here? Choti amma comes and says komal? Komal hugs her. Choti amma says you have grown up. and you look so pretty. Komal says you look like gold. Your shine never goes. She meets badi amma and everyone. Badi amma says that’s dadda ji; meet him too. Komal cracks joke. Dadda says you can. So you are komal? Lakhan and Poonam comes in. Dadda ji says this is begusarai’s bahu bali to be. Everyone is dazed. Mithlesh says and that’s my wife. Komal says your gaze showed me that this is your wife, Maya. Rekha says and I am.. Komal says you are rekha chachi. Everyone knows you. You have a sharp tongue but a pure heart. She looks at Bhushan and says this is your own Bhushan chacha. Rekha says meet my son Lakhan and his wife Poonam. komal meets them both. Komal says to Poonam I don’t know you much but it seems like you can be a good friend of mine. Poonam says yes. Choti amma says come rest komal. Komal has a box in her hand. Dadda recalls the same box in the car. Dadda says wait a minute.
Dada says is this box yours? She says yes. He says that means your car threw this mud at me. Komal says if it has happened then I am sorry. It was not my intention. dadda says I forgave you but in return you have to do something. you have to give me this box.

Komal gives the box to dadda. Dadda says give me its key as well. She says I forgot the key at home. Dadda says okay then tomorrow I will get a duplicate key for it and give you, your stuff and keep this box with me. Komal says okay. She goes to the her guest room. Komal keep looking at the box. She says no worries, it will come back to me.
Komal comes to choti amma she says your room is really nice. Choti amma says not nicer than you. Thank God you came. I wanted to talk to you. Don’t get dadda ji mad. He has kept your box today, tomorrow he can punish you. Komal giggles and says why do you get worried? I will handle everything. Choti says I know you will. I don’t want dadda ji to get mad at you. Choti says I hope you are wise enough. Komal says that is why I came here. At dinner, Komal says the food is so tasty that I would eat my fingers. Choti amma says eat the sweet. Poonam serves her. Komal says I will eat this but you have to promise me something. Amma asked me not to eat much that I would get fat. You have to promise me that you won’t tell her. No guy would marry me. Then amma would taunt me. Komal says I am done. Now you and Poonam sit and I will serve. Poonam says we will eat later. Maya says we don’t let guests work. Komal says you called me guest? Maya says I didn’t mean that. Komal says this is my house, you will sit and eat now and I will serve. Poonam and Maya sit. Komal serves them. She says Badi amma where are you going? Badi amma says I have to eat medicine. Komal says I will bring it, don’t worry. Dadda ji says in heart I have to find out what’s behind this sweet tongue.
Komal goes towards dadda’s room. She says in heart before someone comes, I have to get my box from dadda’s room. She sees the box in dadda’s room. Poonam comes and stops her. Komal shuts the door and says Poonam? Komal says I came to bring Badi amma’s medicine. Poonam says this is dadda’s room. Komal says this is such a big house. Poonam says that is Badi amma’s room. Komal says okay.
Lakhan stops Poonam. Poonam says sorry I didn’t see. He says I was focusing on you and then I collided with you. Poonam smiles. She says its cold. Take quilt from closet. He says do you have it? He says in heart why don’t you come back in my life. In my room. That room haunts me. She says did you say anything? She says in heart why are you quiey? Ask me to come. I will come running. Lakhan says you should come yourself. Poonam says in heart how can I come. I feel shy. Lakhan says did you say something? She says take a quilt, good night. Lakhan says in heart you couldn’t ask her Lakhan.
Lakhan comes to his room. He recalls last night. Lakhan says this is too much, I will go and bring her here.
Poonam is asleep in the store. The fan is about to fall on her. Lakhan comes and sees her. Poonam says in heart I am sure dada ji has done this. Lakhan says you won’t sleep here from now on Poonam. You are safe there. Lets go.
Poonam says I will sleep down. Lakhan says I can help you in setting up mattress. Lakhan holds her hand. He comes close to her and picks pillow from the bed. Poonam smiles. He takes out another mattress and places it on the other side of the bed,
Lakhan says stop looking here and sleep.

Komal goes to dadda’s room and tries to take the box from under his arm. Dadda wakes up. Komal hides under the bed. she says I hope he doesn’t see me. Dadda drinks water.
He sleeps again, Komal takes the box and sneaks out of his room.
Komal places the box in her room. she says you stay here box, I will come after changing. She comes and takes the box. She opens the box, its a lizard inside it. komal says how are you? I was really missing you. Don’t move, wait. She takes out the lizard and says how are you? I really missed you. You have to be in my blood and then run in my body. When dadda took you away from me I was so mad. People say that you are poisonous. but they don’t know it is good for me. Be mine. She smashes the lizard on table squeezes it. She burns the dead lizard in the coal and cooks it.
She rolls its ashes in a leaf and smokes it. Dada wakes up and sees the box isn’t there.
Komal shivers after smoking. she holds her head. She lies on bed and laughs. Dada sees the box is not there. He says I am sure that girl took it from here. He comes to room and sees her asleep. Dadda looks for the box. Dadda says you have the box and I will prove that. He goes out. Komal opens her eyes. She gets up and smiles. Dadda brings Mithlesh in his room. He says I placed the box here. Mithlesh says why are you after that box? I will make you gold box and let me sleep. Dada says why is she not giving me? There is something with that box and her. Badi amma and Choti amma comes in. Badi amma says is there anything wrong? Mithlesh sasy no, everything is fine. Dadda ji says call that girl. Choti says komal? Dadda says yes. He says wait I will do it rather. Dadda sees her asleep. Choti says she is sleeping. Dadda says she is acting. Dadda says I will wake her up. Mithlesh says don’t do that. Choti amma will wake her up. Please bring her to his room, Choti amma. He takes Dadda ji with him,.
Komal comes in dadda’s room with Choti amma after a while. Dadda says where is the box?