MONDAY UPDATE UPDATE ON KING OF HEARTS, 18TH OF NOVEMBER, 2019 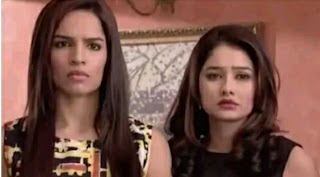 Tanu tells Aaliya that Rocky said all what she had wanted to say. Aaliya tells her that it is a good plan and says that you are very clever. Tanu says she has learnt this from her. She says Abhi was hearing Rocky’s words silently, and says his words will make way in his mind and then he will realize that Pragya is not suitable for him. Aaliya says you did the right thing and proved that even you have a mind in you. She says he said the right thing that she is Old fashioned and have no match with my rockstar brother. She thanks Tanu. Tanu says Rocky gave her The perfect name, she looks like grandma and works as a cleaner. They laugh.
Purab is upset. Abhi says you are sad to hear Rocky’s words? Purab says do you want me to console her? He says I am happy that I didn’t get engaged to Pragya that day and says that day my life was saved because of my good fate. Abhi asks what does he mean? Purab says whatever happens is for good. Abhi asks him to say it clearly.
Purab says when Rocky said all that, my confusion was gone. He says when you fixed the engagement, I was tensed. When engagement was cancelled, I felt relieved and thought if I don’t want to marry her. He says I am thankful to Rocky that I don’t want to marry her. He says Rocky has much knowledge of status and says he said that Pragya is not classy, fashionable and boring. He says she is not my type and people will laugh at me if I go with her. He says I realize that I was never in love with her. He says Pragya is not suitable to be his wife, and says she has no qualities to be a wife. Abhi is angry and asks how can you reject such a good girl? Purab says I am correcting my mistake, how I’m supposed to marry someone who isn’t my type, and I will become a joke. Abhi asks him to shut up and says life partner is the one with whom they can spend their life happily and says we don’t marry for the world, but for our happiness, wife is not a trophy to show to others. He says a good life partner is the one with whom you can live happily and asks him not to come in Rocky’s talks. He says Rocky can’t understand Pragya’s beauty and asks him to understand.
Purab says you have Tanu who is a super model and tells that it is easy to give lecture to others. Abhi says there is no comparison between Tanu and Pragya and says Pragya is far better than Tanu. Purab says if you like Pragya so much, then we can exchange our girlfriends. Abhi gets angry. Purab says I am asking you to exchange girlfriend and not wife. Abhi shouts his name. He says you have gone mad and I shall not speak anything. Purab says you have accepted that Pragya is nothing in front of Tanu. Abhi thinks what might Pragya be feeling and gets sad. Pragya is upset.

Purab comes to her and asks her to stop crying and says you are reacting as if it was Abhi who said that to you. Pragya says he said the right thing. Purab tells Pragya that he backfired the plan on Aaliya and Tanu. He says I told him that you are not suitable for me. Pragya says Abhi values Rocky’s words and he said that I am not fashionable, have no status and shall not stay in this house! She asks what have you done, you have made the situation worse! Purab says no.
He says Abhi have become more protective and caring whenever someone tries to separate them. He says when I was badmouthing you, he raised his hand at me, but stopped himself. Pragya says he slapped you. Purab says no. He says when Abhi could raise his hand on his best childhood friend, see what he will do now.
Abhi asks Rocky how could he have insulted Pragya? Rocky badmouths Pragya’s looks and calls her ugly. Abhi asks how dare you call her ugly! Rocky says you have returned my favour well. He says I came here to meet Tanu. Abhi says you don’t know Pragya and have spoken so much about her. He says Pragya is highly intelligent and educated, and she is not that rich, but she is rich with values, and says you don’t deserve to be my friend. Rocky says you are crossing your line. Abhi asks Rocky to get out and says you have crossed humanity limit. Rocky says he will ban him from the Industry. Abhi asks him to do whatever he wants, and asks him to leave. Purab sees Abhi scolding Rocky and thinks Abhi’s love could be seen.
Tanu asks Abhi to see the decoration
pics. Abhi says he is not in the mood and tells that he is upset about Rocky’s words. Tanu says I want to talk to you about it and says I feel that Rocky shouldn’t have said this to Pragya’s face, although he said the truth. She says we know that Pragya is simple, and have no sense to sit in high society. She says Pragya doesn’t know how to dress classy and says whenever you take her to a party, my friends laughs at her. She says I feel like your fans will get down because of her and your market value also will get down. She says you look best with me and not with her. She says everything will be fine now. Abhi says even you think like Rocky, I thought being a good human is nice and asks what did you learn by staying with me? He says I like simple people, but I am a rockstar as it is my work, but I am simple from inside. He says I am angry at Rocky and feeling sad on my decision to choose you, it is really sad. You couldn’t understand me or Pragya, and goes.
Pragya tells Beeji that Abhi tied bandage on her hand with much affection. Beeji says it seems her wound will be fine soon, and it is because of Abhi’s love. Abhi comes there and asks what they are talking about? Sarla asks him to sit. Abhi says I don’t want to drink tea now. Sarla says I will bring Carrot Cake, and asks him to sit for 2 mins. Abhi sits. Beeji says I will come, and goes. Pragya asks why have you come so early in the morning? Abhi says can’t I come and asks what Beeji was saying? Pragya asks if you have any work? Abhi says I have to take you out now, else Sarla will make me eat big slice of carrot cake and would make me sleep here. He says he is troubled and asks her to come. He takes her with him.

Aaliya asks Tanu if Abhi likes the décor idea? Tanu says whatever we do against Pragya, we lose and Pragya gets the advantage. She says Abhi will do something and now he hates Rocky. Aaliya asks her not to think bad. Tanu thinks what will Abhi do?
Abhi and Pragya are in the car. Pragya thinks why does he look so disturbed and not speaking? Abhi thinks how to tell her that she has to change for Purab, although she seems to be perfect for him. He says he thought to go somewhere. Pragya asks if Tanu was busy? Abhi says yes. Pragya says it means I am his second choice. Abhi asks what did you say? Pragya says nothing. He says we will sit in the café. Pragya asks him to stop the car and covers his face with her dupatta. She says if your fans identify you then we can’t enjoy. She asks him to come.
She asks Abhi to eat Gola. Abhi says ice cream. Pragya says she likes to eat Gola since childhood and reminisces about Bulbul. Abhi asks who is Bulbul? Pragya says she was her sister and is dead now. Abhi asks what happened to her? Pragya gets sad and recalls her death. They get Gola and begin eating it. Allah Wariyan song plays……Pragya says you are eating Gola like a child and looking cute. Abhi thinks nobody sees her from the heart sight, he thinks no girl can be innocent and simple like her. Suddenly, Pragya’s Gola falls down. She gets sad. Abhi looks at her.
He laughs and says she made Gola fall like a kid and asks her to eat his Gola and says he is done. Pragya eats his Gola. Allah Wariyan plays…..Abhi looks at Pragya.
Abhi explains to Pragya about the style statement in details, and says everyone don’t think from their heart usually. Such people do and work according to other people and asks her to win people’s heart through her style. He asks her to be a little hot and stylish. Pragya asks if she is not good being simple? Abhi says you are good and I like you, but I want others to like you as well. He says I want you to look hot and cool. Pragya says I am best like this. Abhi says I want people to praise you and says I will train you and make you look really hot and cool. Pragya asks if you will get happiness by doing this? Abhi says yes. Pragya agrees. Abhi hugs her. Pragya thinks Purab was right, Abhi started falling in love with her now.