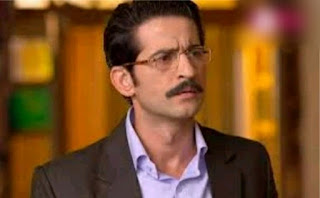 Omkar calls out for Sagar as he has brought jalebi (Sweets) for him. Sagar is about to take them, but Niru stops him. Omkar asks him for the reason? He is well now. Everyone gathers there and looks at him pointedly. Omkar has brought a rudraksh mala for her. I respect you and the way you follow the rules of a widow life. I respect all the other widows too. She tells him to stop. I know how much you respect widows. Sudha walks out of the room along with Pishi Ma. He notices the look on everyone’s faces. He turns to Niru. What happened? Why is everyone staring at me like that? Amma ji and Madhvi walk closer to him followed by Pulkit. Omkar is boggled.
Pulkit questions him about the admission incident. The form and application that you took were never submitted. You informed the reporters. You wanted to spoil Papa’s career and name. Madhvi points out at the sleeping tablet incident. You looked at Sudha ji with bad intentions. You tried to scare Gangaa. Niru says Gangaa never lies. This is why you sent her to that brothel! Omkar calls it a lie. I only had informed you about Gangaa’s whereabouts. Niru says it was a sham. You were only trying to protect yourself. Your game is over now. Your true colours are out in the open. Omkar gets tensed. Niru shows him the video where he was talking to the kidnappers. This shocks everyone else all the more. Do you have any other explanation? I used to respect you as you are my late sister’s husband. I gave you another chance when Sudha ji’s matter came out. I had no proof back then, so I kept quiet. I didn’t want to malign her and my family’s name. I am feeling bad for Amma ji. I know how much she would have been hurt today. Amma ji remarks that she always thought good of him. I thought wrong about my son, my Daughter-in-law and this girl. I am feeling pity for myself. I thought I could judge people well. I thought a liar and a cheater to be a good man. My daughter must be feeling pained. I am thinking how she would have lived with you all the years. You give no importance to relations or people. Omkar shouts at her to be quiet. You all said a lot. He tells Sagar rudely to hold the stuff and starts laughing maniacally. Yes, I did everything. I wanted to make place for myself in this house. I wanted to rule this house! Drishti is in tears.

He says tells Amma ji your useless daughter was a worthless woman and it was good she died. He says he married her because of the money the family has, but he was shocked her family thinks more of honesty. Niranjan tells him to be quiet. Omkar tells him not to shun him down and says your sister was a burden to me and gave me this worthless girl (Drishti) instead of a boy. He says Gangaa was his biggest enemy since she’s always so nosy. He shakes Gangaa with full force and asks why she didn’t die that day he gave her overdose? Sagar and Madhvi shouts at him to stop it. Sudha comes and slaps him repeatedly and says you are bad for even speaking ill of your wife. He hits him hardly again saying this is for making my fellow widows doubt my purity and loyalty thinking of me as useless. She hits him repeatedly saying you are a despicable man and you should die for even thinking I could end up with someone like you.
Madhvi comes to stop her by hugging her telling her it’s alright.
Niranjan tries to scold him, but Amma ji stpps him saying it’s pointless trying to reason someone like him. Amma ji tells him to leave this house this instant. Omkar gets angry. He shouts at Drishti saying your Grandma is sending us out of here. He goes in to pick his loads and comes downstairs. He forces Drishti to go out with him. But Drishti runs to Niranjan begging him to let her stay here please. Niranjan agrees. Omkar says fine, that I do not want a burden like her (Drishti) with me.
Amma ji calls him back to return Madhvi’s jewellery since she entrusted it with him. He returns it angrily and leaves. Niranjan comes to hug Amma ji as she’s in tears.
It’s the following Morning. Madhvi comes to meet Niranjan and sees his worried look. She asks if it’s still about yesterday’s incident? He nods and says he’s just worried about Amma ji since Omkar was like the root of all The problems so Amma ji must still be in shock.
The MLA calls Niranjan just then and threatens him with death (Accident precisely). He ends the call. Niranjan shakes it off and assures Madhvi it’s nothing when she asked for what the Minister had said to him. The MLA tells his goon, we have to stop Niranjan from going to the court since my election is nearby and he doesn’t want any Scandal.
The family is on the table eating their breakfast. Gangaa is on her way to drop the garland when Niranjan calls her and tells her to be fast, that he will like to drop her at school today. She smiles at that.
They are in the car. Niranjan’s car is being followed unknown to him. He gets to Gangaa’s school and drops her at the School gate and leaves.
The Peon sees the girls in Gangaa’s class tampering with Gangaa’s Chair. He asks them to stop it since it could wound someone. They laugh and tells him to mind his business.
Gangaa comes and greets him on his way out of the class.

All the girls start laughing at Gangaa as she falls when she tries to sit on her desk. Gangaa confronts Bulbul. I know you must have done this. The girls get into a brawl when the teacher (Ms. D’Souza) comes there. She stops Gangaa. You are the same girl who told everything to the Headmistress. Gangaa tries to say something, but the teacher is in no mood to listen. Bulbul blames Gangaa for breaking the bench. The teacher seconds Bulbul. Gangaa keeps on telling her that she is innocent, but in vain. She asks all the girls to take out their books. She says the Headmistress will come and make an announcement. She tells a girl to man the gate. Inform me when you see the headmistress heading here. I will finish my game till then. Gangaa thinks that she will need hammer and screwdriver to fix the desk. Peon uncle must have it.
A man (MLA’s goon) is following Niru’s car. He loses the car as another commuter comes in between. He swears to end Niru’s chapter today.
There will be 15th august celebration in Sagar’s school. All the kids have to participate one way or the other. Yash wants to win the trophy by doing a dance act. Another kid mocks him. He says I will win it this year.
A similar announcement is being made in Gangaa’s class. She is excited thinking about the celebrations. The Headmistress tells the kids that they can participate in the functions, but they only have to decide what they have to do and how. She finds Gangaa busy with the screwdriver and asks her about it? Another kid shares that Gangaa broke the desk so she is fixing it. She checks the desk. You have done it brilliantly. It doesn’t look like it has been repaired. Gangaa thanks her. My Bappa has taught me all this. Can I take part in the celebrations too? She nods.
Niru reaches the Court. MLA’s goon is already there. Niranjan steps down from the car and picks up a call. His phone falls as he collides with someone. Just then he notices the approaching car. He jumps aside to save himself and gets hurt on the head by a rickshaw parked nearby. Raghav ji rushes to his side. Niru tells him to inform the police. It wasn’t an accident. Someone made me a target. I have seen the face of the driver. We will have to report it.
Amma ji is tensed thinking about the enemies Niru has gottten himself. Niru reasons that there is danger in every other case. I cannot stop working because of it. Madhvi remembers his morning convo with someone on the phone which had made him tensed. Niru shakes his head. I am perfectly fine. I have told the police about the attacker. Raghav ji tells him that the Inspector is on his way. Gangaa brings turmeric milk for him. He gladly takes it and makes her sit next to him. Thank you! He notices everyone’s sad faces. There is nothing to worry about. I am perfectly fine! Police comes there. Inspector has brought along the sketch of the man as per Niru’s description. Niru affirms it. Gangaa too looks at the sketch. I have seen him somewhere. Everyone is taken aback. Niru shows it to her once again. Tell me more about it. Who is this guy? Gangaa is unable to recall it for sure. I saw him long back. I am not sure where, but I surely have seen him! She thinks one more time, but it’s unclear. Maybe he had a gun too. I cannot remember it for sure. Inspector assures Niru that they will find this guy ASAP. Keep us updated in case she recalls anything. He leaves. Amma ji asks Maharaj ji to take her to The temple. Gangaa is in thoughts.
Niru asks for water from Madhvi. She is in tears as she looks at the blood spot on his shirt. The matter isn’t so small. Thankfully nothing happened to you. He assures her that he is absolutely fine. She asks him to drop this case. We have everything. He says one guy has lost a life. Is it not my responsibility to get justice for his family? He refuses to back off after getting scared. She replies that she needs him, Amma ji needs him. This family needs him. What will we do without you? He assures her that nothing will happen to him. I will win this case! Have faith in your God if not me.
Prabha comes to see Niru. She as usual fakes concern. Amma ji stops her from talking when Prabha is talking way too negative. Madhvi asks her to have food. Prabha gladly agrees.
Sagar is drawing. Gangaa appreciates the way he is doing it. Yash sits there and keeps munching onto something. He helps Gangaa in writing more names of the martyrs. I am sure this only will win. Yash remarks that only MLA’s son, Chander will win. MLA will be the chief guest so his son is bound to win. Gangaa reasons that the best wins. There should be no bias. Yash calls Independence Day celebrations boring. Gangaa counters him. There is a celebration in my school too. I too will win just like how Sagar would win as well.
MLA’s goon assures MLA that Niru won’t take the case now. I have scared him enough. MLA is not so sure about the same as Niru is a tough man. He will get another date for the case. I will have to do something else to stop him from going on that day as well. MLA asks his guy to disappear for a while. Police might be looking for you. The guy agrees. MLA wants to get Niru off this case at any cost. I will have to do something different!