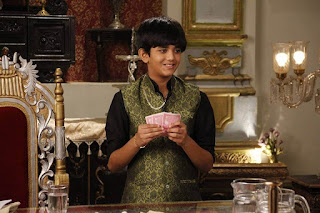 Next morning, Gangaa is studying in her ashram. She thinks of Sir’s words. He is so worried about me. He will lose the case if he doesn’t make me give my statement. I have to get justice for my Bappa and all the others who died in the stampede. The culprits will otherwise roam free. His hard work will go in vain. I made a very big mistake by losing that CD. I will have to help Sir win this case at any cost. There is a knock on the door. A man asks if someone is inside? A lady thinks what if it’s MLA’s goons. Did they find out about Gangaa? She covers Gangaa’s head with a saree. It is a random guy who asks about an address. The lady is relieved. Gangaa thinks that it won’t be a problem if no one recognizes her when she is on her way to the court. Yes, I will have to do something like this! I will now go to court and give my statement. No one can stop me now!
Amma ji thinks of doing something so that Gangaa does not reach the court. She puts the same idea in Sagar’s head. She says we have to stop her somehow. If she appears in the court, then her life can be in danger. She is trying to help Niru, but she’s unable to understand the risk is on her life. Niru can never be happy by putting her life at risk. Sagar falls for her words. I won’t let her reach the court. Don’t tell Papa. Amma ji agrees. She gives him offering after which he leaves. Amma ji thinks that there is no point fighting against a rich man. Niru is so bent upon getting Gangaa justice. I used to pray for his success all the time, but this time I would pray that he loses. The problem will go away only then. I did a good job by twisting my words before Sagar. Only him can stop Gangaa from reaching the court. She will neither go to court, nor will she be able to help Sir. Niru will not win the case. She loves her self-respect very much. It will be so good if she sticks to her words now.
Niru tells Raghav ji to change the name of the witness. I cannot play with her life. Remove her name and submit the file. He has noticed that a guy is keeping an eye on their house. He gets a call from Gangaa. He signals to Raghav ji to wait. Gangaa says I know you are worried about me. I know you won’t make me give my statement. Don’t do it. I have thought of something. All the problems will go away. She tells him of her plan in mute. Niru loves her plan. He thanks her and ends the call. He tells Raghav ji not to remove Gangaa’s plan. I had forgotten once she has made up her mind, then she never back off no matter what. She has found a unique way to reach the court. It is a little dangerous, risky, but we can take a chance. We will have to find another girl of her height, size to take to the court with us, so we can fool MLA’s Men.
Gangaa has told her plan to Sagar. He finds it risky. Sagar asks Gangaa if she will take such a big risk to help Papa? She replies that she can do anything to make Sir happy. Don’t try to scare me. I am not a coward like you. It is very important for me to make amends. He tells her to do whatever she likes. I won’t stop you. He leaves from there.
At home, a family has agreed to help Niru. They are worried for their daughter. Niru talks about how so many people lost their lives in that incident. It will be great if you help me. I will not let her get in any trouble. The decision is yours. The parents of the girl agree. Everyone looks happy except Amma ji. The parents agree to come tomorrow morning so the girl can be made to dress up like Gangaa. They leave. Amma ji thinks if it happens, then Gangaa will succeed in her idea. She will come back to my house. What should I do?
At night, Sagar thinks of Gangaa. I am not a coward. I am concerned for you. this is why I was asking you not to do so. Gangaa too thinks of her convo with Sagar. I know how much you care for me, but I have no other chance. I have to win Sir’s trust. I have to get the culprits of my Bappa and other people punished. I will have to do this for them. When will you understand this? Sagar thinks that she will start understanding him the day she stops acting so stubborn!

The goon looks shocked as the knife is not at all bloodied even after constantly poking the sack with knife. What is inside? Raghav ji says I told you I am taking old clothes to distribute amongst the poor people. The goons order their Men to put check post in the area and check every single vehicle that passes from there.
MLA’s goons have made the real policemen unconscious and have taken over the check post. They check every single vehicle. The goons (who had checked Raghav ji’s car) reach there. They recognize the truck in which all the ladies from the ashram are. Where are you going? Sudha replies that they are going to court to see the proceedings. We will pray that you lose. The goons make everyone get down so the truck can be checked. Pishi Ma keeps sitting as Sudha lies that she has back
pain. They stop the goons from checking the Saraswati (goddess) idol. You will be cursed. The goons do not check it. The ladies sit inside the truck once again. The goons let them go. Sudha asks Gangaa if she is fine? She replies in affirmative. Sudha hides her face again so the goons doesn’t see her.
Niru, Sagar and Pulkit are waiting for Sudha ji and the team to reach the court. Sagar prays that his father wins the case. Hope Gangaa returns home soon. MLA, Srivastava enters. Raghav ji too reaches there. Niru gets busy talking to him. The judge comes so everyone takes their place. MLA’s phone rings. Judge orders everyone to keep their phones off inside the courtroom or they will be thrown out. MLA wonders why the goons are calling him every now and then?
MLA’s lawyer starts the proceedings. He talks in favour of the MLA. Niru counters him. MLA is anxious to find out if his Men got hold of Gangaa. My phone is off too. MLA’s lawyer asks Niru to present the proof that he has. Niru requests the judge to give him some time. My witness is on the way. Judge gives him 10 minutes. The court is adjourned for the same time period.
Raghav ji checks on Sudha. They are almost about to reach the Court.
The court resumes. Gangaa still hasn’t reached the Court. Judge tells Niru that the time is up. Your witness is still not here. MLA’s lawyer calls it a waste of time. Don’t delay in making the judgement. Niru explains that some people have been making efforts to make sure his witness is not able to reach the court. The judge refuses. He starts to give judgement in MLA’s favour when the Ashram ladies walk in with Gangaa. Niru walks proudly up to Gangaa. She is my witness. She never lies. She will say the truth today also. MLA looks on shocked.
Gangaa stands in the witness box. Judge pronounces MLA as guilty.
Madhvi is thrilled to know that Niru won the case. Niru gives the credit to Gangaa for his success. I will be staying back in Allahabad for today to complete the paper work. Sagar and Pulkit will come with Raghav ji. I will go and bring Gangaa home tomorrow.
Madhvi asks Maharaj ji to get sweets. Amma ji is not at all happy to know that Gangaa will be back in her house. Should I celebrate Niru’s victory or be sad at Gangaa’s return? I will not give up. I will not allow you to even step inside my house.
The people bless Gangaa for helping their loved ones get justice. MLA gets arrested. He looks pointedly at Gangaa as he leaves with the Policemen. Gangaa looks at her hands. I hope you are happy now Bappa. You and the other people got justice after all. You were right. One should open their fist to see and understand what they are all capable of doing. I did it Bappa!
Niru tells Gangaa that he is proud of her for what she has done. She asks him if he will take her home with him now? He agrees. I have some work in Allahabad. I will come tomorrow to pick you up. Go with Sudha ji. Pack your stuff. He also asks Raghav ji to take Sagar and Pulkit with him.
Sagar is happy for Gangaa. I am not a coward. If I was a coward, then I wouldn’t have helped you. I felt like helping you, so I did. I know you could have done everything on your own, but I still helped you.
Gangaa tells Sagar and Pulkit that Sir is happy with her now as everything happened positively. I did what I said I will do. The culprits got punished. I too will come to your home tomorrow with Sir. Sagar corrects her. It is our home. Sudha asks her to come with her. Gangaa tells her and the ladies to go. I have to go with Sagar for some important work.

A smile is the best makeup any girl can wear. 🥰

May your life be filled with very successful and h