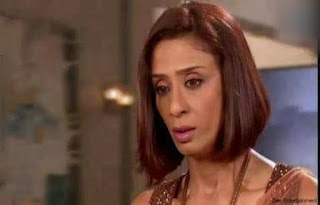 A Servant informs DD that Roshni and her Son-in-law has come. DD gets irked hearing that and says a Poor man cannot be her Son-in-Law and shouts at her to get out! She sees Resham preparing aarti tray and throws it away. She then asks Roshni why did she come back if it’s not her house! Naani asks why is she shouting and asks her to give the proof that she is a mother! DD says she gave whatever Roshni wanted and worked hard so that Roshni won’t struggle, but she married a Poor Man! She says Roshni proved that that she isn’t her daughter by marrying a beggar! Naani asks her to stop!

Roshni gets hurt from hearing this from her mother and sadly tries to walk out, but Sid stops her. He tells DD that she has only hatred in her dictionary and not love, and suggests she throws her dictionary away, or else, she will be alone and emotionally poor. He says she struggled to give Roshni a lavish life, but could not be her mother, else Roshni would not have accepted someone else as her mother. She’s only a businesswoman who thinks of only profit and asks her to forget everything and hug Roshni, he promises that they will all be happy in the future. DD says it was a brilliant speech and says he should give his dialogues to begging for money and calls him blo*dy scamster!

Roshni gets angry hearing that and warns her not to badmouth her husband and in-laws, and says their love is enough for her to live, and tells Sid that this woman doesn’t know love and can go to any extent to prove herself right! She says her husband thinks DD can become a Mother and bless her daughter, but he does not know that DD does not have a heart but a money printing machine who does not feel pain! She asks Sid why he came here and asks her to take her back to her Mom (Simran) and Dad (Raj) instead.

Sid reminisces the incidents where Roshni feels sad for her family, his Dad’s words, Prashanth dadi’s words, Bablu’s words, Simran’s words, and so on, and tells Roshni that he will not go from here without taking DD’s blessings. Roshni asks if what has happened to him isn’t enough (the insult). He says their relationship can’t be fruitful without DD’s blessings and will not go from here until she blesses them. Roshni says DD does not deserve that respect and says she will go home without him to her in-laws. He says he is doing this according to his Parent’s upbringing.
DD says he is doing this to get into her lavish house and get away from his chawl! Roshni takes their marriage veil and leaves from there alone.

DD warns him not to enter her house, or else, she will asks her security to kick him out! He asks her to call the security and he will call the Police 🚓 and inform them about she trying to kidnap him and swap him with Krish and would even inform Roshni about it, as she will lose her daughter completely then!

Raj happily prepares the honeymoon bed for Sid and Roshni. Simran sees that and says we will leave Sid and Roshni alone for some days to let them understand themselves better. He says she is right and says even she must be missing A/C and tries to get naughty with her. She says their Son is married now and asks him to behave.

Roshni comes crying and says Sid did not come back with her.
Sid enters the DD’s house and asks Naani and others to welcome him in. Mona tells that Roshni will miss her Mom the more, seeing this. He says he is doing it for Roshni and cares for her the most than anybody in this world and asks her not to worry about Roshni as she is going to stay with better people.

Simran consoles Roshni and asks her to remember she is her Mom now and asks her to cheer up as she has
to perform other rituals.
Resham performs aarti on Sid to greet him in while Simran performs aarti on Roshni and greets her in with red water tray to step feets in it and get in with footprints. Roshni enters the house while Sid enters DD’s house and greets Naani and others.

DD gets irked seeing that and tries to walk in, but Sid stops her and says he saw her enjoying the rituals and asks her to join them, he tries to touch her feet to take her blessings, but she walks out. Sid says she’s just like her daughter who gets irked easily. He then thinks he will get everything set and bring back Roshni here, and says he is not a weeping Son-in-law who will tolerate Mother-in-law’s torture.

DD thinks she will kick Sid out soon. Naani comes and asks if she wants Sid and everyone else(including her) kicked out from her house! DD says she is not in a mood to listen to her lecture as she is annoyed about Roshni’s marriage with a beggar! Naani says she was happy when she started working for the first time and with her hard work, she built her business empire, and people made her DD from Durga, but she lost her daughter. She says she is waiting to hear mamma from her daughter, but she is very arrogant and superegoistic and kicked her granddaughter out infront of her eyes. She asks her to break her egoistic mirror, as mirror can be bought but not people’s faith, and requests her to bring back Roshni, or else,she will lose her for the rest of her life! DD reminisces Naani’s words.

Sid tells Bablu that he is thinking a lot, and says DD is an elder but doing a mistake, and with time, everything will be alright. Naani says he is great to think that, and gets a call from someone and worriedly says she will be there. Sid asks if everything is alright? DD comes there, and tells Sid to move out, and asks Naani what happened? Naani says her Aunt is not well and she has to go there now. Sid says he will accompany her. DD asks him to back off and asks Kesar to accompany Naani!

Naani warns DD not to misbehave with Sid! DD gets irked and walks back to her room. Naani tells Sid that she is sure that he will set everything right and asks him to promise her to take care of his responsibilities well. He promises, she thanks and hugs him.

Kesar comes to his room and sees Resham sitting sadly. Bablu and Mona apologize to Sid. Sid says Roshni will get angry if she hears that his Uncle/Aunt apologized to him and touches Mona’s feet instead and takes her blessings. Mona and Bablu wish him goodnight and leaves from there.

Sid looks at Roshni’s pic romantically and reminisces his romantic moments with her. A song… plays in the background. Roshni on the other side remembers Sid and gets sad. Sid gets a call from his Mom who asks how could he do this, as she was waiting for him to get her daughter-in-law, but her daughter-in-law came alone, and asks him to come home. Sid thinks he is trying to unite families, which he learnt from his Mom, and he will surely unite Roshni and her Mom soon.