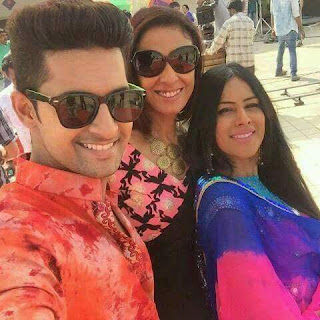 Resham hides something behind her and asks Roshini what she’s doing with the mob? Roshini says, she wants to clean her room. Mona asks Resham to clean her
room. Resham makes excuses and leaves. Mona tells Roshni that she will send the maid. Roshni says, she will do it being a middle class daughter-in-law. She sweeps her room and tells Mona that the trash is showing her attitude. Mona closes the window. She tells that you will get satisfaction if you do these small things.

Sid is busy making the designs. Kesar comes there and tells Sid that he knows the work well. Sid says, I will do it. Kesar says, I will teach you. Sid says, give me some time. Kesar pours coffee on his design and gets shocked. She asks Sid not to tell DD anything. Sid agrees.

Kesar signals to DD that the work is done. DD thinks, she will send Sid back to his Parents’s poor chawl.

Simran asks Raj to call Sid. Raj asks Simran not to cry. Simran says she’s getting emotional for her Son.
Roshni calls Sid and tells him that his Mother has called them for dinner. Sid says okay. They say I love you to each other. Roshini calls him again and tells that she cleaned her room alone. Sid asks, what is the need for that? He says, I could have helped you and says sorry. Roshni says she wanted to become a perfect middle class wife. Sid tells her that he is busy.
Roshini calls Sid again and asks about his favourite colour? Sid says orange and disconnects the call.

DD comes and asks him to show the designs to her! Sid thinks his boss is Madam hitler. He goes to her cabin.

Roshni is getting ready, while Mona helps her. Mona asks her to wear sarees daily. Resham comes and asks about Roshni? Roshni tells her that she is going to Sid’s house for dinner. Resham thinks to inform DD. Roshni calls Sid, but his phone is kept on his desk. Sid is busy working. Roshini gets sad and angry.
DD looks at him and thinks your Parents’ food must have been wasted.

Simran waits for Sid and Roshni at dinner. Roshni calls her and tells her that they cannot attend her dinner as Sid has not yet come home from the Office. Simran says it is okay as it is Sid’s first day at work. She gets emotional.

Sid comes home tired and sees Roshni asleep. He apologizes to her. She wakes up and asks why did he come so late and why didn’t he pick his call? He says he was busy. She says let us call Mom and inform her. He says she must be asleep and they can call her later. Just then, he gets Raj’s call who scolds him for not coming for dinner and asks him to come on Sunday! Sid agrees. He then sees Roshni angry at him and tries to console her by asking her to forgive him and starts his romantic talks, and says she is beautiful. She smiles and goes near his ears and says she is feeling hungry. He takes out noodles from his bag. She says there is nothing to use and prepare the noodles. He prepares them on a Candle flame🕯. Pal do pal… song plays in the background. They both reminisce DD’s challenge that he will be her live-in son-in-law. Roshni praises Sid’s presence of mind. She tastes the noodles 🍜 and likes its taste. They both enjoy it by feeding each other. He says he needs prize for feeding her at midnight and tries to kiss her. She shows him the opened door and asks him to close it. He romantically looks at her and tries to close the door, but the door falls on him. She gets worried and he is shocked to see the door’s hinges broken.

DD watches them from the balcony. Resham shows the screws and signals thumbs up to DD. DD thinks she will do something that will make Roshni herself get rid of Sid!

Sid dreams about lying that he is Sidharth Kukreja and not Sidharth Malhotra. Roshni wakes him up and shows him his mobile with his name as Sidharth Malhotra. She asks how dare he lie to her and says she hates him now! She says she hates him as he took away her NGO and says he is worst than her Mom! He says he loves her a lot and hid his identity as he feared he would lose her. She asks him to get out from here! He asks her not to say that and asks what difference will it makesm when they both love each other? She says she hates rich people, and drags him out of the house, and says she can live without him and locks the door! It is just Sid’s dream, he wakes up worriedly and deletes his name from his mobile. He thinks he will soon make her realize that all rich people are not bad and not like her Mom that thinks only money is needed to live a happy life, and thinks he will do this with his Mom’s blessings.

DD gets ready in the morning and asks the Servant to call Resham. The Servant says she is not at home. DD thinks all wasted people are at home and asks the servant to fix Roshni’s room door!

A smile is the best makeup any girl can wear. 🥰

May your life be filled with very successful and h