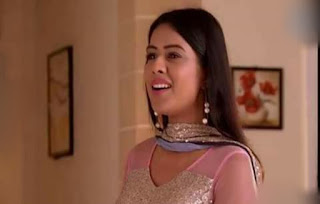 Sid starts the cards game with DD. DD says he can back off if he wishes? He distributes the cards and says she can leave the game, and he won’t tell anyone about it. DD’s friend says he cooks food well, but that does not mean he can defeat DD. Sid says when a lady’s luck is with him, then why should he worry? DD asks him to think about his money! Sid says what will we do by saving money, as it is written in Geeta. DD checks her cards and thinks she cannot believe her daughter has married such a big loser! Sid taunts DD that she looks tensed and can back off if she likes? DD asks him to pick his third card! Sid says he will pick his third card later. DD increases the betting money.

Roshni tells Mona that DD must have gotten the winning cards, so she is increasing the bet due to that. DD taunts Sid to borrow money
from her as he is a family member. Both Sid and DD increase the betting money continuously. Sid says he is tried now and wants to finish the game. He asks DD to show her cards. DD shows her card and Sid gets tensed seeing king, queen and a joker. DD smiles seeing his tensed face. Her friends praise her and taunt Sid. DD signals to Kesar to pick the betting money, but Sid stops him and says he has not shown his cards yet. He shows his car and wins the game! 😍

DD is irked seeing Sid winning. Mona and Roshni get happy while DD’s puppet, Kesar is surprised. Roshni happily tells Sid that she is happy seeing DD has lost! DD’s friend says she lost her money, but DD got an amazing Son-in-law! DD angrily walks away from there. Sid returns Mona’s borrowed money and takes her blessings.

Roshni happily looks at the won money and asks Sid what will he buy from this money? He says it is a surprise. Resham hears their conversation and informs DD about it and asks how she is feeling after her defeat?
Resham tells Kesar that they’ve been married for 10 years and he has never given her a surprise till now? Kesar gets irked hearing her words and says she should be happy that she married him, with her habit of binge eating, since nobody would have married her! He says it is good that DD’s blessings are with him. Resham thinks DD is using him everyday.

DD on the breakfast table hears Sid and Roshni’s romantic talks and asks Bablu to call Sid as she wants to leave for Office now!
Sid in the Office thinks of surprising Roshni by booking a honeymoon package!
Kesar comes there and tries to peep into his laptop, but Sid hides his laptop screen.

Roshni with great difficulty tries to prepare Sid’s favourite dishes. She sees a paper honeymoon package pamphlet with Sid and her name written on it. She gets happy, and sees Sid in front of her and hugs him. Brinjal AKA Eggplant or Aubergine, burns during their talks and she feels sad that she cannot learn anything, and asks what will they eat now? Sid says he will bring something from outside. She says we have to save money. He says even after honeymoon, they have a lot of money to save. Resham hears their conversation and sees honeymoon package pamplet.

Sid brings tea and Pakoras for Roshni. Roshni says she will not eat pakoras in this hot sun. He says she wanted to experience middle class life. She says she doesn’t want to walk for 4 hours. They see a bus and get into it. They both start romancing while standing in the bus. Roshni says she is feeling very excited as she is traveling in a bus for the first time. He says likewise him, and then says he is traveling in a bus with her for the first time.

DD angrily calls Kesar, but his phone is out of reach. She sees Mona and Bablu coming into her room and insults them with her witty words.

Roshni and Sid reached the hotel. Sid says with his money, he could only arrange honeymoon in this hotel. She says she is very happy with him. He asks the receptionist to check his bookings. The Receptionist
checks and says his booking is cancelled. He asks about any other hotel nearby? She says it is 10 km away.

Kesar calls DD and says that he cancelled Sid/Roshni’s hotel booking. DD thanks him. Sid asks the receptionist how could she cancel his booking without his consent? She says he was the one who cancelled it himseld. He asks her to call the hotel manager!

Roshni gets irked seeing all this and tries to walk out. Sid tries to stop her and says it’s not his mistake. She says the hotel booking doesn’t cancel like that! He says in five star hotels, it does not, but in small motels, it happens. He says he shouldn’t have planned a cheap honeymoon plan for them. She says she wants to stay alone and walks out!

Roshni walks on a secluded road and   remembers what Sid said to her. She gets afraid seeing a shadow. She hears some noise and gets scared.
She calls out for Sid and pleads with Sid to help her. Sid comes and holds her from behind. She gets shocked, but gets happy seeing him and hugs him. She points at the direction she heard the noise from. Sid looks and sees a cat. He tells her it’s only a cat. Roshni hits him with her bag and he asks why she’s hitting him like that? She says she loves him a lot, so she fights with him, and asks him to arrange food as she is very hungry.

Mona and Resham order food in a hotel room. Resham starts her ordering and reads the Menu wierdly. The Waiter is surprised 🙀 hearing new names, but tells her the actual names when he sees the names. She sees a costly dish with weird name and orders it. The Waiter asks if she is sure about it? She says yes and and asks him to bring it quickly!
Mona comes back and prays for Sid and Roshni’s hassle-free honeymoon.

Sid and Roshni reach a roadside restaurant and order food. Roshni asks for spoon. He says it is a roadside restaurant and not a continental hotel, so they should eat with their hands. Roshni then enjoys the food. She says her Mom wouldn’t like it. He says his Mom can eat this kind of food the whole day. She gets sad and says he is away from his Mom because of her! He says when he is not sad, then she should not be. The Waiter gives Sid the food bill. Sid checks his wallet and he’s shocked to see his wallet missing. She asks Roshni to pay the bill. She says she didn’t bring any money as it was his honeymoon plan and She only has Make-up items in her bags. Sid tells the waiter that he does not have any money. The Owner comes and says he will call the Police 🚓. The Police arrest them. Kesar who has stolen Sid’s wallet informs DD about it.