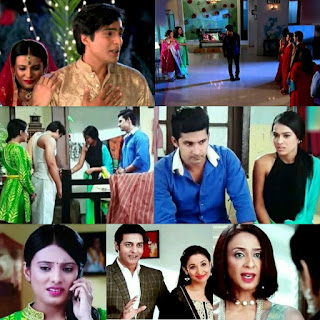 At home, DD sits in the living room, remembering Bablu’s confession.
The others arrive home and Bablu goes to squat in front of DD. He apologises again, saying he didn’t have the courage to tell her the truth.
DD asks him if she didn’t do enough for him to make him do this to her!
She says no matter what she says and how much she shouts at him, she does all that to help him; she had great plans for when he would get married. She thought she would make his wedding so special and she would do what Roshni couldn’t allow her do.
Bablu asks if she can forgive him?
DD says he will have to leave the house! He will pack his bags and leave with his Middle class wife!

Pratima tells DD that Bablu considers her as his Mother, so she can’t do that to him? Bablu tells Pratima not to say anything. DD says she is doing it because he lied to her!

DD tells Sid that her family fell apart the day he came into it! She calls the servant and orders him to pack out all of Bablu things from his room because he is leaving the house!
Roshni is in tears. DD leaves for her bedroom.

Bablu and Pratima are also crying.
Naani hugs them both. Mona also does the same thing and blesses them. Bablu apologises to everyone again. Raj says it’s not his fault.
Sid asks him what he will do now?
Bablu says he knows the family will be okay because Sid will take care of it. He says good bye to the rest of them. Roshni is inconsolable.

As they leave, everyone is in tears.
Pratima tells Bablu to wait and talk to DD one last time, maybe she will forgive them. Bablu touches her face, then holds her hand and they walk out.
Naani almost breaks down, so Mona takes her to her room.

Roshni says to Raj/Simran to stay here as it is midnight. Simran says she will go back to her room and asks Roshni to control herself. Once Roshni goes to her room, Raj says he irked DD more in trying to entangle relationships and asks him to continue in his mission.
Sid tries to talk to Roshni, but Roshni ignores him and says goodnight to her in-laws, then goes to her room.
Raj tells Sid that he knows he has only good intentions, but he has taken up a responsibility and he should see it through.

Later at night. Sid is holding a tray of food and lamenting the fact that he and Roshni hasn’t broken their fast yet. Roshni comes out of the bathroom and Sid begs her to eat so they can break their fast. He says he’s sorry and he keeps getting into trouble whenever he tries to help other people. He tries to feed her and she eats a little, then feeds him and just as he thinks everything is fine, Roshni turns and goes to bed, without saying a word to him.

Kesar enters his room and Resham starts to sing Bablu’s praises, that he is brave, heroic, and so on. She sees him tensed and asks him why he’s sad? He tells her to keep quiet!
Resham says she knows he’s thinking that DD will also kick them out one day, but that won’t happen because she is upper class.
Kesar says he’s worried because Bablu used to manage the office and DD has no idea how to do it, now, the responsibility will fall on him.

Naani goes to meet DD in her room. She says families have issues, but it doesn’t mean they break up. She begs her to reconsider because her brother was scared of her and had to stay away from his wife for 2 years. She begs her to allow Bablu to stay in the house.
DD says she can’t let him stay with her! Nasni says if she carries on like this, one day she will be all alone!
DD says she raised Bablu like her own child and now, he left her for that woman! She blames Sid.
Naani says she is channeling her anger at the wrong person; Sid takes all the insults from her and doesn’t say anything. He kept Bablu’s secret and bore all the accusations without exposing Bablu. She says DD broke Bablu’s heart and the family will fall apart because of her! She tells her to mark her words!

It’s early in the morning. Sid is getting ready for work and Roshni is ironing his shirt. He asked for it, and she gives it to him. He looks for his wallet and she hands it to him, without a word. He asks for his watch and handkerchief? She gives them to him without saying a word. He tells himself that Roshni is doing everything without talking to him and he doesn’t know what to do?

Roshni calls Bablu to ask how he is doing and says she wants to visit him.
He says Sid also called him last night and wants to visit as well. Sid tells Roshni that they should go together.
He follows her to the door and says he forgot his shoes. As he goes to get his shoes, she walks away and he runs after her.

They are riding in the back of a rickshaw. Sid tries to touch her, but she pushes him away. He stops a Man selling candy floss and buys two packs. He offers her one, but she doesn’t collect it. The driver tells him she’s upset. Sid jokes that he didn’t notice. The driver says such things also happen in his family. Sid tells him to concentrate on driving.

Sid and Roshni arrive at Bablu’s place and it is a very poor apartment. Roshni says she can’t believe DD is doing this and can’t imagine what it was like for Bablu and Pratima to stay apart for a long time. Bablu tells her to stop crying. She gives him his bag and he tells them to have a seat. Pratima gets them tea. They sit on the bed.

Back home, DD comes down for breakfast and calls Kesar and Bablu’s name subconsciously. She then reminisces yesterday’s incident. Kesar apologises for being late.
Mona tells DD that they have a prayer ceremony for the diwali and Bablu is supposed to be a part of it. DD warns that no one should mention Bablu in the house again! Naani says DD mentioned Bablu, yet she’s shouting at them.
DD tells Kesar that he will take care of Bablu’s work as from today! She then calls Sid. Mona says he left for Office very early. Resham reminisces Roshni and Sid talking about going to Bablu’s house and informs DD about it. DD tells Kesar to let Sid know she pays him a salary, so he can’t come and go as he pleases. DD leaves and Mona berates Resham for blabbing.
Naani says she knows the type of person Sid is and he’s the type that will bring the family together. She says Roshni is so lucky to have him.

Roshni says it’s not fair that Bablu doesn’t stay in the house anymore.
Sid agrees, but Roshni ignores him.
Bablu asks if there is something wrong that the two of them are not talking to one another? Sid says Roshni hasn’t spoken to him since yesterday because he kept the secret form her.

Pratima says she knows why Roshni is upset and she told Sid that they should tell her. She (Pratima) gets a call from the Office and she tells them she already sent in her resignation.
She is told that she’s no longer a permanent employee, and if she quits the job before giving them 3 months notice, she will have to pay back 3 months salary. She says she can’t afford it so she has to return to work.

Bablu says he will talk to DD, but Pratima tells him not to bother; she will go back to work. Sid tells her to think about it because DD will make sure her life is not easy now. Pratima says she will manage, maybe DD will eventually allow Bablu back home.
Roshni tells Pratima that her Uncle is so lucky to have her. Pratima says Sid made everything possible! Roshni looks at Sid and smiles.

Simran tells Raj that this is the first diwali they will have to celebrate without Sid. She says Roshni is now their daughter, so they have to celebrate the ceremony with them. Raj assures her that Sid and Roshni will celebrate diwali with them; he has a plan. They give their domestic staff bonuses and gifts for the holiday (diwali).

Pratima arrived at work and DD berates her for coming late! She tells Kesar to start fining late comers!
Pratima says her watch showed 9:30 am, when she got to work. DD tells her to set her watch to match the Office clock and also tells her to dress like the other staff (Modern short dresses)! Pratima says she’s not comfortable in such clothes. DD gets irked and leaves.
Sid commends Pratima on how she handled DD. He tells her to wait and see how DD’s Son-in-law and daughter-in-law will handle her, and show her how to love!