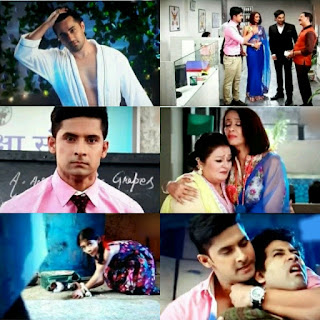 Sid talks to his dad on the phone, informing him that he won’t be able to attend the meeting tomorrow, else DD will kick him out. He says Prashant knows everything he has to do and can handle the job, but his Dad tells him to balance his Professional and Personal life and handle the job he asked him to. Sid gets tensed thinking what to do now?
Rajveer is by the Poolside. He hears his conversation and smirks.

In the morning, Sid helps Roshni get ready and tells her to eat something.
He feeds her and she complains that he added too much sugar. He tells her she’s late for work.
She runs off.

Rajveer tells DD that he was thinking of helping her increase her jewelry brand with a low range brand, so as to reach more people. He suggests that DD should expand her business and starts a budget jewelry for middle class people. He says she can try American diamond jewelry. DD likes his idea. He says he wants to research the market, and she says it is a good idea.

Sid peeps from the window and sees thst DD looks busy. He decides to leave for his father’s company.
As he packs his bag, Kesar stops him and alerts DD.

DD comes out of her Office and asks Sid where he’s going!
Rajveer follows her and asks Sid if he’s ready for them to go? He winks at Sid and tells DD that he and Sid are supposed to go and see her factory.
DD says Kesar will go with them.
Rajveer says he will be more comfortable with Sid since they are of same age grade. DD agrees.

Roshni is at work, teaching some underprivileged children in a poor neighbourhood.
Simran calls her on the phone. Roshni tells her she is at work to support Sid financially. Simran says Roshni could have told her if she needed money, so she could give it to her from her savings.
Roshni sees some Men trying to kidnap one of her Pupils, a little girl.
She runs after them, while Simran is still listening on the phone. The Men put the little girl into their van.
Roshni struggles with them, so they took her as well. Simran panics and immediately dials Sid’s number, who is with Rajveer in his car. She tells him what she overheard when she was speaking to Roshni.
Rajveer, who is driving, asks Sid if Roshni is okay? Sid says Roshni is not answering her phone! They go to her place of work and asks another Teacher about her? The lady tells them all what happened. Sid is very worried.

Samaira comes home with shopping bags. Mona asks her why did she do so much shopping! Samaira says her husband is a millionaire and not like Sid who is very poor! Mona asks her to behave herself! Resham sees the bags and excitedly asks Samaira why she didn’t take her? Samaira asks her to stop behaving like a Middle class woman! Resham is offended. She tells Mona that Samaira is exactly like DD and talks like her!

Sid is asking the children where the Men took their Teacher?
Samaira calls Rajveer and hears what Sid was asking the children. Rajveer tells her that he will speak to her later. Samaira informs Mona that Roshni has been kidnapped! Mona and Resham panic.
Samaira says Roshni is just a drama queen to have gotten herself into such a situation!

The Children see the Car passing again and point it out to Sid.
Rajveer says he has already called the Police. Sid says he can’t wait for the Police, as Roshni is in danger and he has to find her!

DD and kesar rush home when they hear the news. Naani gets hysterical and DD assures her that Roshni will be fine because she has spoken to the Police Commissioner and they will find her! Samaira taunts that this is happening because of that poor Sid! Mona asks her to stop! but DD asks if what Samaira said is wrong? She tells Mona that it is Sid’s fault that Roshni has to work and if anything happens to Roshni, she will deal with Sid!

Simran informs Raj about Roshni’s kidnap and asks him to do whatever he can, but get Roshni back! Raj says he will use all his contacts and asks her to leave for the Police Station.

Roshni and the little girl are in an abandoned warehouse. Their hands are tied. The kidnappers talk about how they will sell off the little girl to go and work abroad (Dubai) as a slave.
Roshni and the little girl overhear them. The little girl sees a piece from a broken bottle and crawls to it.
She picks it and takes it to Roshni who cuts through their ropes.
Roshni remembers her phone fell when they were taking her away.
She sees a phone charging and tries to take it, but one of the Men looks behind and doesn’t see her.
He complains to the others who laugh at him and say he’s probably drunk!
Roshni hears them, so she quickly goes back to her position.
All the Men turn to look and see she’s still there. They continue playing their game of cards.
Roshni tells the little girl to get the phone. The girl brings the Phone to her and Roshni calls Sid. She is able to tell him the neighbourhood they took her to, then one of the Men snatches the phone from her.

Sid panics again as he hears the voice of the leader of the kidnappers.
The Men carry the little girl and Roshni begs them to leave her alone.
They order her to go and sit down!
One goon says he will rape her and then send this kid to Dubai as a slave! He is about to touch her when Sid appears suddenly and starts to fight the Men. He asks how dare they try to touch his Roshni! Two (2) of them escape and Sid unleashes all his anger on the last one. He beats him up so badly and almost chokes him to death, but Roshni begs him to stop!
Roshni tells Sid that we have to save this girl! Sid and Roshni rush to the little girl. Sid tells the girl that he is Sid and will rescue her. Sid tries to make a phone call, but the Men return with back up.
The leader informs him that the girl has been sold and if Sid likes, they will sell Roshni too. Sid gets angry hearing this. He is about to react when one of the Men hits him with a stick on the back of the head. He falls to the ground in pain. A Goon picks up the kid and then catches Roshni.

Rajveer comes there and starts
beating the goons. He wakes the unconscious 😵 Sid up and they both start fighting the goons and overpower them. As the fights are going on, one of the kidnappers, is able to sneak the little girl away. When the Men take off, Roshni hugs Sid and cries, and realises the little girl is gone! She requests Sid to save the girl! Sid tells her to go home with Raj, while he tries to get the girl.
Roshni says she will go with him, as she can’t leave him alone. Rajveer says Sid is right and says his plan will be ruined if she accompanies him. Roshni agrees and walks out with Rajveer.

DD and the whole family is worried about Roshni and DD asks Samaira to call Rajveer so he can let them know what is happening with Roshni!

Rajveer arrives and everyone is shocked to see him. Roshni enters soon after, to everyone’s relief.
They all rush to her and Samaira goes to hug her husband.
DD tells Roshni that everything is happening because she is married to Sid; she has to work because he can’t make enough money to take care of her! Roshni tells her not to insult Sid!
Rajveer says Sid was very worried about Roshni and when she called, he collected the number she called with from Sid and he was able to use his phone to locate the address where Roshni was, using the Mobile app. He says Sid was very upset and DD is mistaken about him.

DD says all she knows is that Roshni is in this situation today because Sid can’t earn enough for both of them!
Roshni says DD will always blame Sid, but for her information, she is safe today because of Sid!
DD says she is safe because of Rajveer who used his own phone to find her location and called the Police too! She says if Sid saved her, why is he not home?

Sid arrives with the little girl.
DD says she can’t believe he is more concerned about the child than his wife! She asks why he brought the chawl girl to her house!

The Police arrive and say they want Roshni’s statement. Roshni gets busy giving her statement.
Sid follows DD and she asks him why he can’t just leave Roshni alone!
He asks her if she can leave Roshni?
DD says she is Roshni’s Mother and of course, she can’t leave her!
Sid says she can’t leave her because Roshni is her daughter, and it’s the same for him, she is his wife and he can’t leave her.
The Inspector after taking Roshni’s statement assures her that he will trace the Gang soon and says he will will have to take custody of the Child, and hand her over to her Parents once he traces them.
DD angrily murmurs when will she get rid of Sid! Rajveer hears this and smirks.

When the Police leaves, Roshni goes to her room and Sid follows.
In the room, Sid apologizes to Roshni that she is hurt because of him, and says Mother-in-law is right, he shouldn’t have let her work! Roshni says he is more hurt than her, and shows his wounds and says she will apply medicine on it. He hugs her and says he was worried about her, and what would he have done if something had happened to her, as he thought for a moment that he would lose her. She asks him to stop blaming himself and says she loves a Man who loves relationships more than money and keeps smiling even in the toughest situations and bears DD’s nonsense. She then tends to Sid’s wounds and they both share a tender moment. Muskurane Ki Waja Tum ho… song plays in the background.
Sid finds it difficult to remove his shirt due to the pain, and she helps him. She gets turmeric milk for him and they both rest for the day.
When Roshni falls asleep, Sid gets a call from his Parents. He tells them that Roshni is fine, he is also fine and he needs to speak with both of them, and says he would meet them tomorrow, at 10am to discuss something important.