Roshni is at Sam and Yash’s place.
She’s not happy that Mona kept the news about Yash’s Sister’s death from her.
Mona says she didn’t mention the death of Yash’s sister because she didn’t want DD to worry since she had an award ceremony to attend.

Sid arrives with Misha and introduces her as his friend.
Misha apologises for coming at this time, but Mona and Sam tell her it’s okay. Sid asks Sam to be courageous and Roshni asks when Yash will be back?
Sam says he’s coming back with his Sister’s Children.
Sid tells her they are kids and she has to take them as hers as they have no where to go.
Sam says she will send them to a boarding school!
Roshni says they are still grieving and they are innocent, so they need to keep them in the house. She suggests she doesn’t send them away as the kids will accept her easily, if she tries.
Mona agrees with Roshni.
Misha thinks Roshni is giving good advice and doesn’t look like Simran and Kritika depict, and wonders why Simran doesn’t want her to be with Sid.

A Doctor checks DD and tells her she has been drugged. DD says it’s not possible!
Kesar is in the room and feeling uncomfortable.
Roshni’s Grandmother asks why anyone would do that? Kesar says maybe someone is jealous of DD.
The Doctor tells DD that he has given her the antidote and leaves. DD tells her Mother that she wants to go and thank and apologize to Shiv for what he did for her yesterday. 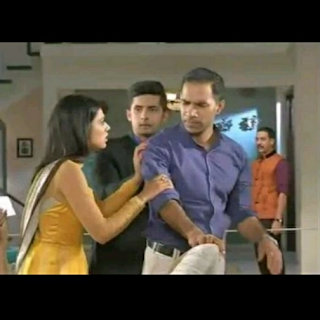 DD enters the living room and calls for Shiv.
As he is walking towards her, his foot kicks the wrap that the medicine was packaged in (Courier pack).
DD picks it up and sees the instructions that the drug may cause drowsiness.
She accuses him and Sid of drugging her!! He says he does not understand what she means. She says there are master planners here and shows him the wrapper. She says he drugged her to get into her good books! He says he does not about it.
Shiv asks Sid if he knows anything about it?
Sid says he doesn’t. Shiv asks Roshni if she knows anything and she says she doesn’t either. Sid says they played drama to let her gain confidence, but that was all. DD says this wrapper cannot lie! She says she cannot trust Sid as he divorced her daughter and still stays in her house! She asks Shiv if he made all this plan alone? Shiv is shocked.
Kesar watches them from a distance, unable to say anything.
DD continues to accuse Shiv, saying she’s very disappointed that he could stoop to such a level!
She says he took her Son from her, and now wants to take her daughter too!

Sid tells DD that she never believes anyone but thinks the worst of them while she’s the only one who is always right and never changes.
Shiv gets upset and goes to the room.
Sid sees Kesar peeping from behind the wall and goes after him. 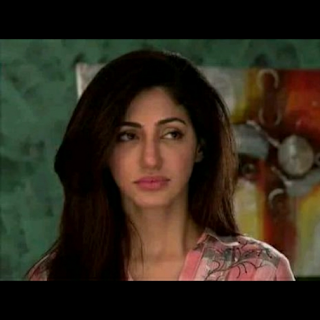 Yash and his late Sister’s kids return to India.
They scare Samaira as she opens the door and she falls down.
Sam tells them they will stay in the guest room but the older girl says they want to stay with Yash and Sam in their own room.
Yash begs Samaira to allow the kids stay wit them. He says they are the kid’s only family now and should take care of them so much that they should forget their Parents.

Shiv and Sid are with Kesar telling him how lucky he is that he’s not being accused by DD. Sid and Shiv both frighten him about how DD will purnish him if she ever finds out who the Culprit is.

Kesar says he didn’t do anything.
He starts to walk away but he hears Sid telling Shiv that he knows the owner of the Courier Company the package came from and will just call to find out who made the order, then he will report to DD. Besides, he can always catch a thief and will catch the Culprit in this case and DD will punch him like anything.

Kesar starts crying loudly and comes back to confess that he was the one who ordered the Medicine, saying he only meant to help DD relax so she could give a good speech.
Sid says since his intention was true, they will not let DD know about his mistake and assures him to relax and that he has been saved by his big brother (Shiv) but he shouldn’t do such a thing next time. 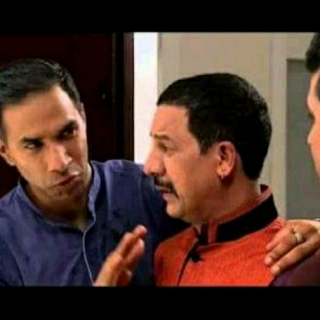 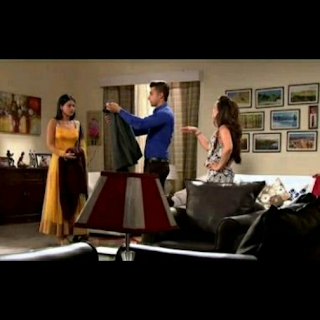 Roshni comes to Sid’s house with him.
Roshni is upset that Kesar was the one who put the drug in DD’s drink. She asks Sid why he didn’t purnish Kesar? He calms her down saying he will use Kesar’s words against him. She says he is a genius.
Roshni sees the button on his jacket has come loose so she tells him to take it off so she can fix it.
Sid gives her the jacket.

Misha rushes into the room with a bag just then and asks Sid to close his eyes. Once he closes his eyes, she gives him the bag. It contains a brand new blazer. He tries it and says Roshni this is really good! He thanks Misha and sees Roshni looking uncomfortable, so he suggests they all go to lunch together.
Roshni tells them to go without her. She says she has promised Sid’s Grandmother to have lunch with her and can’t go with them.
Sid says no problem.
Roshni walks away and Sid smiles.
He tells Misha that Roshni is jealous so he will go to her. 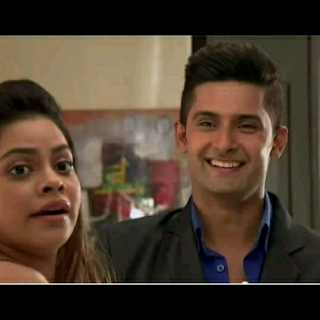 Roshni is with Sid’s Grandmother in her room.
Kritika is spying on them.
Kritika and Simran see Roshni in the Kitchen and Kritika tells Simran to Roshni’s hearing that she has noticed Misha and Sid are really close and something must be going on.
Simran asks if she thinks Sid wants to fill Roshni’s place with Misha? Sid and Misha will make a good Couple though.
Roshni maintains her composure and leaves the Kitchen.
Simran is shocked that she wasn’t affected by their statements. Kritika says she is feeling jealous and their plan worked but they will need to keep at it to make Roshni more jealous.

Sam while correcting her Makeup thinks she will send the kids to the hostel for sure and will see how Yash will stop her!
Yash’s niece sneaks into Samaira’s room and takes her Phone. She senses someone entering her room.

Sid and Misha return from the lunch date. They taunt each other about their weight and diet. Misha challenges him and suggests they race to the door and whoever reaches home first can ask for any wish they like. Sid agrees and they both start running in. 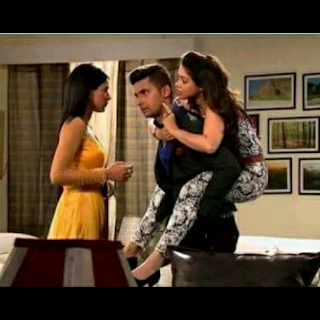 She enters the living room and She is shocked to see Sid carrying Misha on his back.
Misha says hello to her but she doesn’t respond.
She jealously walks out and Misha tells Sid that Roshni is upset with them. Sid says he will handle her.
Roshni is even more upset that Sid didn’t follow her! 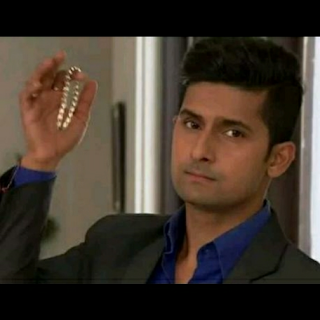 Sid later stops her along the corridor and accuses her of being jealous.
She tries to walk away but he pulls her hand and her bracelet comes off.
She asks for it and he tells her to come and get it.
She goes to him and he pulls her close.
They stare at one another and almost got carried away till Misha spoils the moment by calling for Sid to come and help her with something.
Roshni walks away in anger, leaving a frustrated Sid behind. Sid thinks he has his wife on one side and his bestfriend on the other side.

Roshni is at home having a meal with her father.
Her phone is ringing and she ignores it.
Shiv asks her who is calling and she says it’s not important!

The Door bell rings and Sid arrives and says he was missing his other family. He jokes whenever he comes here, he feels his precious thing is missing here, pointing at Roshni. He brings a box of pastries. Mona says Roshni and Sam love pastries and they used to fight for it in Childhood. He gives Roshni but she ignores him.
He teases that he will take it to Misha.
Roshni angrily takes the pastry.

DD and Kesar enters the living room and Sid asks Kesar how things are going?
Shiv says he’s not hungry and will go to his room and rest.
He stands up and gets dizzy.
Sid holds him on time but Shiv continues that he wants to rest and leaves.
Roshni takes Shiv’s food to him in the room.
DD thinks he is acting.

Next morning, Shiv enters the living room, still dizzy.
DD sees him and tells herself she won’t fall for his tricks again!
He calls for Mona to get him water but she is nowhere to be found.
He tries to go and get it himself but he falls on the floor and faints.
Roshni sees him and calls Sid on the Phone to come and help!
DD becomes worried.

Sam tells Yash she can’t find her Phone.
He tries to trace it with his own Phone. 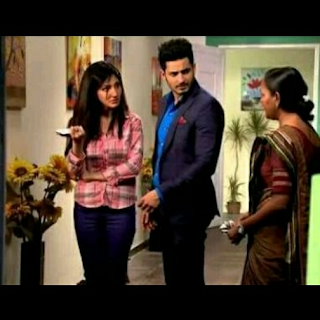 The Doctor tells them that Shiv has a weak pulse, but he will give him an injection.
DD tries to pass the partition rope to to go over to the other side of the room to check on Shiv.
Her Mother stops her and says if she wants to cross the partition due to sympathy, then she should not! She tells her the Doctor said Shiv is fine and if she still wants to go to the other side she can, but that will mean taking off the rope and she can’t put it back!
DD changes her mind and leaves for the Office.

Roshni shouts how she can be so heartless? Shiv tells Roshni to let DD go because he doesn’t want her to come to him like this. He says he doesn’t need DD’s sympathy.
Sid tells Roshni he agrees with Shiv and DD shouldn’t be coming to him out of pity but because she loves him.

Roshni sees Sid brooding and asks what’s on his mind?
Sid says he’s thinking of how to bring her family back together again.