THIS IS FATE S2

Siddharth tells Roshni that he will marry her. He says she doesn’t know how long he has waited.
He looks at her fingers and says she will get a ring tomorrow.
Roshni says her Parents traveled out of town to Shimla and what will they think after returning?
Sid says he doesn’t care what their Parents think, he only cares for her and no one else; he knows DD will react the same way as always and will blame him for everything but he’s used to it.
He says he’s looking forward to being her husband again but also to be DD’s Son-in-law so he can trouble her some more.
Roshni says she hopes nothing can trouble them anymore.
Sid tells her not to worry.

Misha’s friend meets her up in the dark.
She hugs him and says finally he is here, and now, everything will be okay and her plan will be successful! 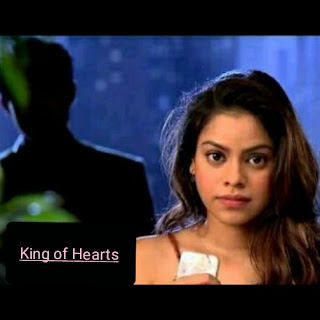 Yash is looking for his niece and nephew all over the house.
He sees a note on the table saying they have decided to go home since he loves Sam more than them!
Sam says she’s sure it’s just a prank.
Yash gets upset and says it’s not a prank!

Sid tells his family that he and Roshni are getting married.
Raj and his Mother are excited.
Kritika and Simran are not happy.
Raj says he wants to call DD so they can start making arrangements.

Misha tells him DD is not in town as she has gone on her honeymoon, so he shouldn’t disturb her.
Raj sees the look on Simran’s face and tells her to have a sweet as her Son is getting married.
Sid tells her that the celebration is nothing without her and he can’t do anything without her blessings, so she should forget everything and let them start all over again and besides, She’s the most important person of his life. 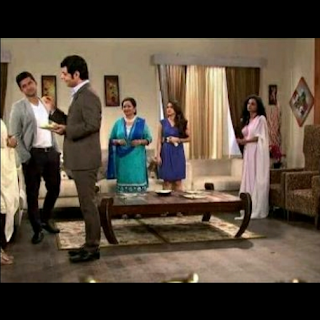 Roshni arrives and Raj hugs her and welcomes her back in their family, saying it’s the happiest day of his life as Roshni is coming back home.
Roshni goes to Simran and says she once took her as a daughter and even tied her wedding knot, so they should forget all that has happened and start afresh.

Simran is in tears as she says She’s sorry and she made a mistake.
Roshni hugs her and says she should not apologize and wipes her tears. She says we Mother and daughter can sort out all of our differences now. Simran smiles.
Sid and Roshni feed her a sweet.
Misha looks jealous and leaves the room. Kritika gets irked seeing them reuniting.
Sid tells his Mum that Misha has been behaving strangely, lately.

Yash and Sam are driving round town, asking if anyone has seen the Children?
Sam says she’s sure they will find them and the kids just wants to trouble him.
Yash stops the Car and asks if she’s mad! He says if she doesn’t want to help find them, she can go home!!
Sam gets out of the Car.
Yash gets a call from someone at the Airport saying there are 2 children there who gave his name and they are very afraid. Yash thanks him and asks him to take care of them until he reaches there.

Misha is looking at a photograph and telling herself that everything is falling into place.
Sid snatches the photo and she tries to take it from him by running behind him to get it. Roshni comes in and he gives it to her who asks Misha who the person is?
Misha says he’s her boyfriend, Neil and she was planning a surprise to introduce them to him tonight.
Sid says he didn’t know she had a boyfriend.
Misha says seeing them so happy has made her decide to also take her own relationship forward.
Roshni is excited for her.

Roshni gets a package delivered to her. It has a card from Sid expressing his feelings and telling her tonight is the night and he’s been waiting for it.
There is a dress in the package. Sid writes to come wearing it for dinner. She happily thanks God and prays to keep things the same. The Candle blows off. 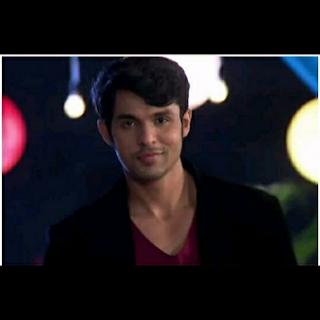 Roshni and Misha meet Sid up at the restaurant. Sid books special table and greets Misha and Roshni.
Misha stretches her hand out to Sid ahead of Roshni and hugs him, leaving Roshni uncomfortable. He tells Roshni she is looking beautiful. He then tells Misha that She’s looking bad. She says she is looking as beautiful as his Wife. He makes them sit and Sid asks where Neil is?
Misha says he’s on his way and Sid should promise to behave.

A Waiter asks what they would like to drink?
Neil asks for Mango juice for himself and Misha. Everyone look at him surprisingly. Misha looks uncomfortable. Neil asks what happened?
Sid says Misha is allergic to Mango.
Neil says he forgot.
Misha says who cares if he forgot?
Neil says Misha has agreed to marry him so he wants Sid to suggest a venue for the engagement.
Roshni suggests they all get engaged at the same place on the same day. 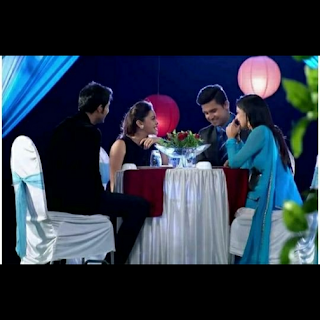 DD wakes up calling Roshni’s name!!
Shiv asks what’s wrong?
DD says she had a horrible dream and feels Roshni will get into a lot of trouble.
Shiv says it’s just her dream and assures her that nothing will happen only good things will happen from hereon.

Sid, Roshni, Misha and Neil are going home.
Some hoodlums start harassing Roshni and Misha.
Sid and Neil engage them in a fight.
Neil is hit on the head with a bottle and he falls down unconscious with blood flowing from his head while Sid is hit with an iron rod which makes him pass out.
The Men take Misha away. 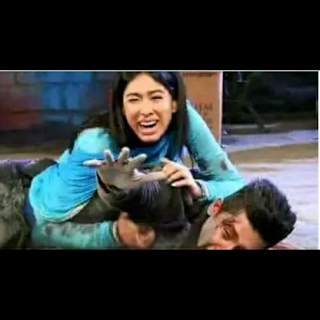 Sid’s Parents arrive with the Police and an ambulance. The Doctors nurses Sid’s wound and takes Neil to the hospital.
Sid asks where is Neil? Roshni says he is fine and he has been taken to the hospital. He asks about Misha?
The Police says they are still looking for Misha. Sid panics and feels guilty for not protecting Misha. He stands up and says he has to look for her!
Roshni and Simran beg him to stop, but Raj tells them to allow him to go.

Roshni and Sid are in the back of his Car. He tells Roshni that he made a mistake by leaving Misha’s hand but Roshni says it’s not his mistake.
The Police Inspector phones Sid to tell him they saw the goons’ jeep in some area and Misha was seen entering a warehouse in a certain part of the town.
Sid tells the driver to take them there.
Sid and Roshni enter the warehouse and start yelling for Misha!
They find her lying on the ground, unconscious and injured.
Sid carries her and they take her to the hospital. 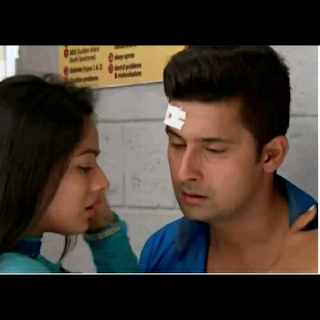 At the hospital, Sid starts blaming himself for what happened to Misha, saying if he hadn’t lost his temper with the thugs, it wouldn’t have happened!
Sid’s Parents are with them. Simran says it is not his mistake.
They hear Misha shouting in the hospital room to leave her!!
Sid panicks and feels guilty again. Raj asks him to stop blaming himself.

The Doctor comes out and informs them that Misha was raped and she’s in a big shock.
Sid is crying and asking himself what he has done!
Roshni holds him.

The Police come to take Misha’s statement but the doctor tells them she is not in the right frame of mind.
Simran tells Sid to come home.
Sid says he’s not going anywhere!
Roshni takes Simran aside and tells her Sid won’t leave because he blames himself, but she will be with him.
Raj and Simran leave.

Roshni holds Sid as he cries.
Misha comes out of her room and holds Sid, asking if he would leave her? She pushes Roshni out of the way telling Roshni not to touch her and not come in between them!!
Sid signals for Roshni to not say anything.
Misha hugs Sid and asks him to protect her from goons. Sid calms her and takes her back to her hospital room. 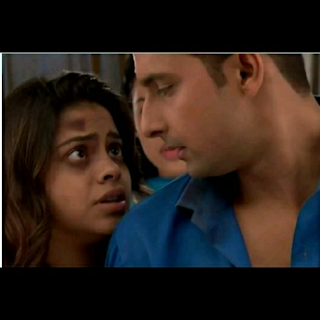 DD and Shiv are back.
Simran and Raj have come to see them and told them everything.
DD feels sorry for Misha and says they should go to the hospital to see her.
Raj says the Doctor said she needs to rest and it is better if they go late as Sid and Roshni are already there.
Simran says she doesn’t know why things go wrong just when everything seems to be failing into place.
Raj tells DD that he alongside the rest of his family has planned to come and ask for Roshni’s hand in marriage for Sid.
DD says nobody told her anything. She says she had gone for just 1-2 days, but a lot has changed here and nobody felt it is important to inform her. Raj says it happened in a fast pace.

Misha panics and gets out of control by throwing things in the room around.
Sid holds her.
Roshni tries to come close but Misha pushes her out of the way and Roshni lands on the ground.
Misha tells Sid to send Roshni away!
Roshni goes to the corridor and Sid goes to ask the Doctor why Misha is behaving strangely.
The Doctor says she has lost part of her memory and doesn’t recognise most people, and she’s only identifying people whom she feels secure with and has forgotten everything before the accident, so she needs the love of her family.
Sid asks when she can come home?
The Doctor says she can go home, but a nurse will go with her.

Roshni tells Sid that Neil has to be with Misha.
Sid and Roshni enter Neil’s hospital room and Neil asks where Misha is?
Sid begs for his forgiveness.
Neil asks what happened?
Sid tells him all that happened.
Neil is in tears.

DD and Shiv are at the Khurana’s home.
Neil’s Mother is also there, complaining that girls who go out in very short dresses are the ones who attract such harm to themselves! She starts commenting on Misha’s short clothes, and so on. DD says she is very narrow minded. Raj says She’s still in the old era and has forgotten the world has moved way ahead.

The Door bell rings, Raj checks and sees the decorators for the engagement. He says he will call them later and then informs Neil’s Mom, Mrs. Kalra, that he wanted Sid and Roshni to get engaged on the same day as Neil and Misha.
Neil’s Mother shouts that she won’t let Misha get engaged to her Son as she may not get well at all, and if he wants, he can get Sid and Roshni engaged.

Sid arrives with Misha, Neil and Roshni.
He tells Neil’s Mother that Misha and Neil will get married today at any cost.
Misha is holding on to Sid and asking who everyone is.